Imagine walking into a restaurant and having to decide between edible or reusable cutlery… That may actually be the case in the near future with reusable and edible packaging ideologies.

Bakeys, a company based in India makes cutlery that is meant to be eaten after use. If you do not want to eat it, simply throw it away. Insects and stray animals will eat them or they will degrade naturally in less than three days.

“These are made of flours. 100% natural. We have tried making them with various flavors”. 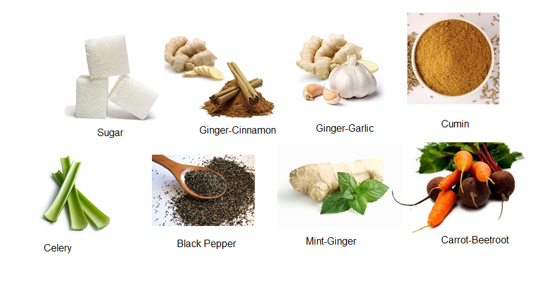 Here is their company video:

Have a great start of the week! Yours, Fran

Luxury tea purveyor Tealeaves has teamed up with world authority on colour Pantone to launch a new collection of tea-infused cocktails and food recipes. 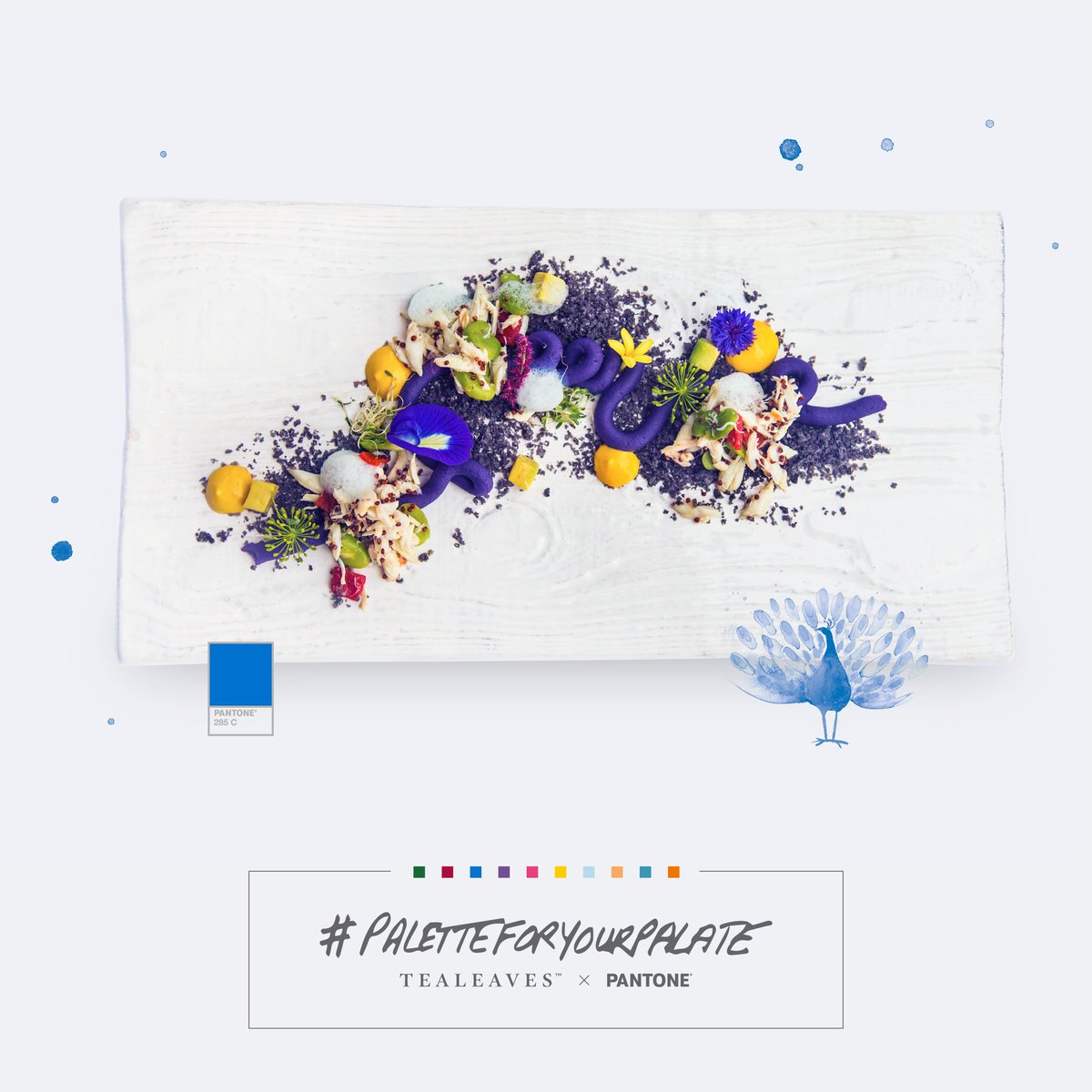 Online exhibition Palette for your Palate explores the subconscious role colour plays in emotional engagement. All 34 recipes are on display online and are available to taste at hosted venues across the US and Canada.

Hergatt’s dish “Celebration of Summer”, a tomato nasturtium flower soup, was inspired by organic vanilla rooibos tea, Pantone’s 714C, a lively orange and the mood imaginative. ‘Colour has the ability to draw us in and immediately create an emotional connection to the things we love,’ says Laurie Pressman, vice-president of Pantone Color Institute.

I am willing to try them all !!! Be open to change the ordinary! Yours, Fran

Mind Power is potent and it can manipulate or simulate circumstances that may seem fictitious and surreal. Based on this premise is the plate and glass combo of the ‘SET TO MIMIC’ tableware. The idea is to put a microchip in us, which interacts with our brain cells so that it can register smells, tastes and textures of our favorite food. When bland or ‘health foods’ are placed on the plate, the microchip manipulates our senses to feel as if we are eating our favorite food.

For example, you could be eating a plate of broccoli, but ‘SET TO MIMIC’ makes you feel as if you are eating a cheeseburger!

Romanian Designer Sorina Răsteanu submitted her innovative idea to the Electrolux Design Lab competition and won. Lars Erikson, head of Electrolux Design and the Design Lab jury says: “For this year’s global design competition, we asked students to submit concepts based on our theme ‘Creating Healthy Homes’. In the end, we selected out of 1,700 entries. The finalists’ concepts are truly innovative and offer new ideas on how we might be living our lives in the future, whether it’s eating healthier or being more sustainable.”

New thoughts around plant development must be explored to feed the surging population and survive climate change. Although Wright’s project is speculative and set far enough in the future to encourage open discussion, the ideas within it explore very present-day hopes and fears.

Conceptual designers are currently looking ahead to what we will be growing and eating decades in the future – and it’s likely to be much more high-tech. Central Saint Martins graduate Mariah Wright has envisaged a scenario, set in the mid 21st century, when common plant breeds are genetically modified to take on extra functions: Here are some examples:

Toxicity-sensing rice, set to emerge in China in 2040, will be modified with colour-expressing genes that show when there is soil contamination nearby: leaves will gradate from lime green to hot red and pink when toxicity is present.

Breadfruit, a tropical plant that doesn’t currently produce latex and isn’t able to grow in England’s current climate, will be able to do both these things in 2060s England. Creating a national industry for rubber production, the plant will be designed to end the country’s dependence on South American imports.

California in 2050, meanwhile, will modify strawberry plants to grow their own protective packaging – cutting down on the chance of damage during transit.

Some of the ideas are appealing, some of them are quite terrifying, but none of them are impossible. Genetic modification holds the promise of delivering great innovations on a global level, but it is hugely controversial.

“Many scientists point to the urgency of developing plants and animals that can feed the surging human population and survive the effects of climate change,” explains Wright. “Now they are asking, when, not if, genetically modified foods will become normalised.”

Can you eat concepts or digest an abstract idea? Sean Rogg’s The Waldorf Project Chapter Two made it possible: eating designers have worked with notable societies and taken on big subjects, using food as one of their mediums to convey an idea. From the traditional family recipes, food has always had richer meanings and emotional connections beyond it’s nutritional function.

Aiming to serve a familiar dish with atypical textures

Taking it up a scale, Martino has created ‘Total Trattorias’ with both Aram Furniture Store and his contemporary gallerist Kate MacGarry, where he designs a whole evening, furniture, food, tableware, lighting and then cooks a selection of his signature Italian dishes for the evening. This simple celebration of the communal meal as artwork or installation shows an attention to detail about all of the elements that constitute an eating event.

In a similar way, artist David Parker creates work that amplifies the social and communicative benefits of feasting together. In his installation Juicework at the HR gallery in LA, he invited locals to come in and use over 2,000 sculptural ceramics and  tools he made to create a giant juicing party.

RCA graduate Johanna Schmeer has created prototypes using nanotechnology for synthetic foodstuffs designed to feed the world’s burgeoning population. In Bioplastic Fantastic, lush colours and glorious inners drip and gloop to reveal themselves like exotic fruits, enticing you to eat them.

Be inspired by the new sensory food experiences!!! Yours, Fran

Just a quick note: there is this FOOD CONFERENCE on FEBRUARY 6, 2015 in NEW YORK CITY

With food officially a cultural obsession, the time seems ripe for Bitten, a new one-day conference on February 6th in NYC dedicated entirely to food innovation. With speakers from recognizable names like Exo, Smorgasburg, and The Infatuation, the event will touch on a range of areas, from sustainability to technology to philanthropy. But what makes Bitten different is its inclusive mantra, which casts a net wider than the professional food world to draw in a diverse crowd of food-loving influencers from all over. So if you love food, networking, and doing good (100% of profits go to Blue Marble Dreams), consider penciling it in.

On the Bitten website it says the following: “We all eat, but recently our relationship with food has become more complicated than ever before — often for the better, some times for the worse. In addition to all the questions we have about what is good for us and our planet and concerns in our ability to feed the growing population, we should remember that food is also tremendously fun. It’s a form of art and a space that’s innovating faster, and with more impact, than any other. That’s where bitten comes in…”

Bon Appetit everyone 😉 and enjoy your weekend!

Not sure whether i like this development… The charcoal trend can be seen in many different beauty applications since quite some time, but now there is a new generation! Many beverage companies push in the market offering this cleansing ingredient charcoal.

Botanic Lab in one of these companies. They have almost a scientific approach with their organic drinks. You can purchase online a variety of drinks also as part of a daily program. You choose a level of intensity such as “soft cleanse” or “hard cleanse” and the mixture of greens and roots will re-boot your system. A daily program costs around 40 Pound.

The L.A. based company called Juice served here also followed the trend by offering a charcoal lemonade. They even claim ‘activated charcoal’… Similar to the Botanic Lab, they also provide you with daily or weekly cleansing programs.

This is one of their series:

To be honest, i rather clean my apartment 😉 that’s also suppose to be liberating! Yours, Franziska