As you know, I give syrup workshops via Airbnb called “From Flowers to Syrup” once in a while. This time the European Flavor Association, short EFFA, has asked me to have an atelier at the Grasse Flavour Day 2018 in the South of France.

Because live cooking was not possible, I prepared 5 of my favorite syrups (cardamom, chili, orange blossom, smoked pepper and hibiscus) and the attendees of the conference could mix & match their own combination in a little empty bottle.

But before mixing your own bottle, you could try out the flavors on a wooden spoon. Of course, everyone wanted to create the nicest combination, which is always a pleasure to watch.

Additionally, next to my atelier was a great cocktail stand, where my syrups were used to spice up the cocktails. For instance: Gin Tonic with a touch of smoked pepper…. hmmm!

About 80 people from the entire flavor industry attended the conference. All of them could get a nice gift bag from In-Imitable with their own syrup mixture, a hand-written label saying which ingredients they used, and a leaflet mentioning ways how to use syrup.

Use it on your steak (instead of a cranberry sauce), or for your coffee (you probably heard about the new trend of lavender latte, that’s simply done with syrup), or on your ice-cream, fruit salad, cereals in the morning, smoothie, but also very nice in your salad dressing to give extra flavor! Just be creative!

In short, I had a great time, learned a lot, spread the love, and made people happy – what else do you want?!? Thanks to EFFA for the opportunity, and to IFF for sponsoring this!

Enjoy the rest of the week. Lots of love. Yours, Fran

The London based restaurant Duck & Waffle launches one-ingredient cocktails, where they explore the level of flavour achievable from one ingredient.

The menu features 10 cocktails named after the ingredients they are based on, such as Olive, Tomato, Avocado and Red Pepper. Each part of the ingredient is used – from tomato skins and red pepper stalks to spent coffee grounds and walnut shells – to showcase its versatility and minimise waste.

‘We have amazing ingredients to work with, why bastardise them with other flavours? I want them to shine in all their glory,’ Rich Woods, head of cocktail development at Duck & Waffle. ‘I wanted to illustrate how much flavour can be extracted from a single ingredient and show the levels of complexity that can be obtained from multiple elements of a single source.’

Basically, what we see in the markets is that mixologists are increasingly adopting a Trash-to-table mindset, repurposing ingredients that are typically discarded to create innovative new serves.

Cocktail bars are also expanding their options to attract trendy teetotalers.
Meet Seedlip, a non-alcoholic “spirit” distilled from herbs. In 2017, Seedlip
was added to the cocktail menu at bars including the NoMad Bar at the
NoMad Hotel in New York, and the American Bar at London’s Savoy. 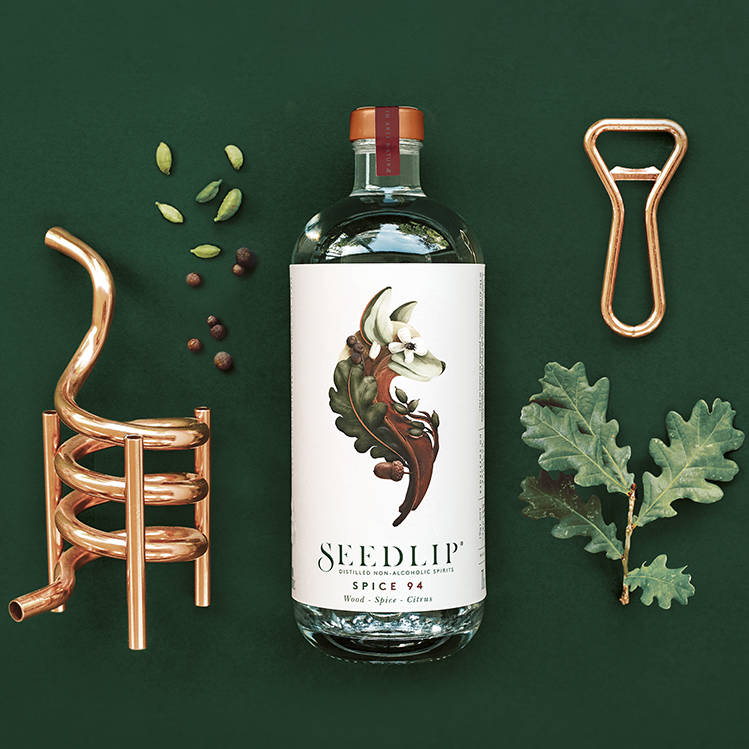 Seedlip contains no alcohol, but the taste calls to mind a liquor, elevating the mocktail experience through its flavor profile and artistic branding.
“You’ve got a good, long, grapefruit citrus finish,” founder Ben Branson told
The Challenger Project. “This is something to sip. It’s not something to gulp
down. There’s an adult aspect to this.” 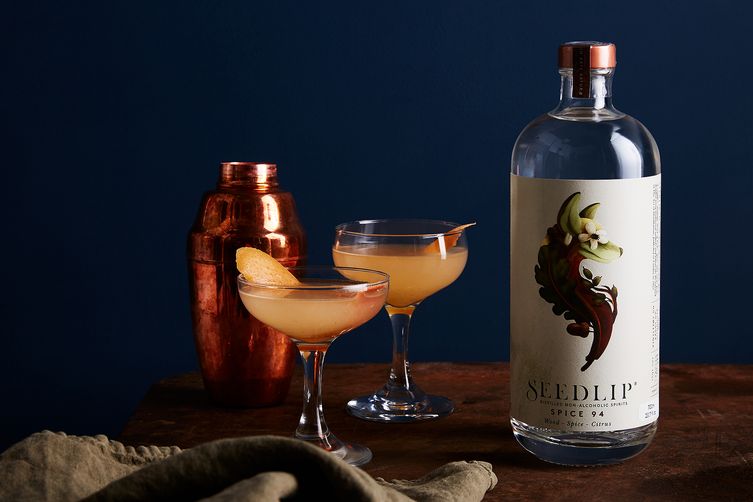 Why it’s interesting: The global alcohol market saw a sluggish 2016, including
the first decline in consumption in the United States since 2011, according
to figures from the International Wine and Spirits Record.

By comparison, the global non-alcoholic beverage market is projected to reach $1.6 trillion by 2025, up from just over $967 billion in 2016, according to a 2017 report from Grand View Research. In the future, look for more elevated experiences geared specifically towards non-alcoholic drinkers.

What a beautiful packaging!!! Already looking at it makes me happy! Yours, Fran

Bring it on baby! Yours, Fran

Designed by the Tequila Patron brand, these ping pong balls are loaded with citrus and herbs. Once in contact with alcohol or soda, the balls aromatize your drink perfectly by forming a cloud of bubbles.

A little sexier than an Aspirin in a glass of water!

For the moment, they are only available in one bar in Virginia, US. But the idea is great and I am convinced that we will quickly find these balls in our bars and supermarkets.

Why not??? Its a simple idea that goes viral because of the fun factor! Yours, Fran

Heyqnut is a grinding machine that prepares fresh nut butter in stores such as your local supermarket. The idea is coming from Germany, where the concept starts creating buzz around the world! 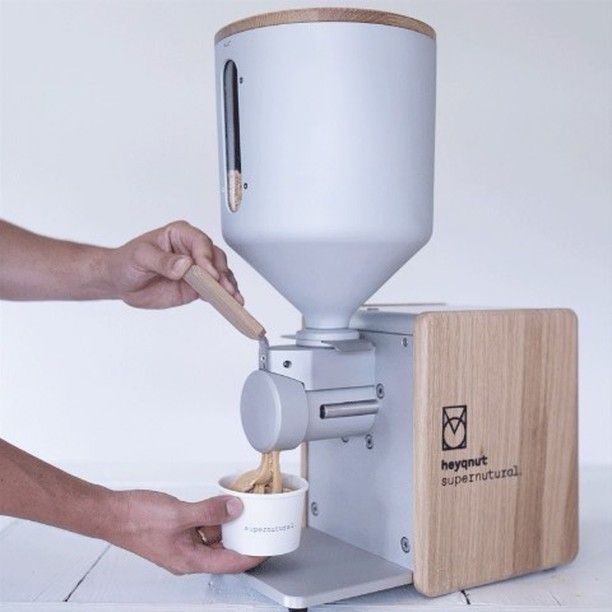 The idea makes total sense: people want to know more & more what exactly they are consuming! Plus we want to live healthier, whilst having a positive eating experience. Fast, uncomplicated and affordable.

The nice thing about Heyqnut is that your nut cream can firstly be made of multiple nuts, but secondly be used for multiple purposes: nice soups, pasta dishes, delicious curries, desserts, chocolate-creams or just pure on your bread.

Enjoy your time-out! Yours, Fran

GROWN has created a new format for adaptogens: supplements that help to boost cortisol and balance stressors that goes beyond powdered supplements. 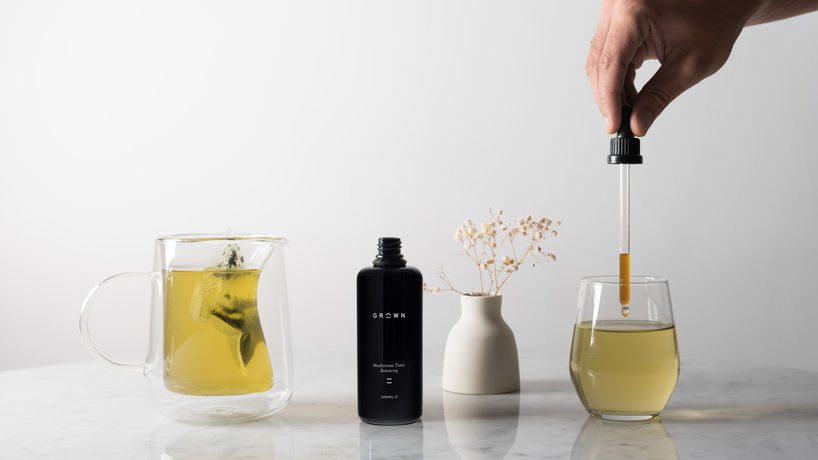 The range of three adaptogenic herb and mushroom tonics consists of a morning iteration to combat fatigue, a mushroom tonic to boost the immune system and a calming evening adaptogen. 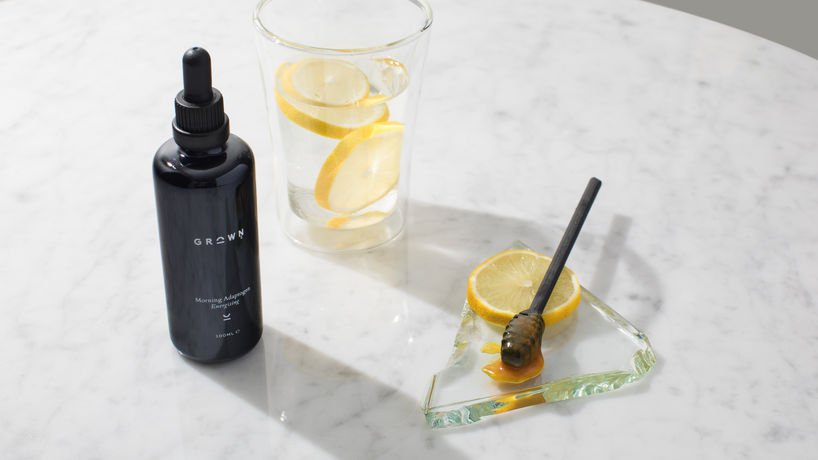 The liquid supplements can either be added to drinks like tea, coffees and smoothies or pipetted straight onto the tongue, making it easy to incorporate into daily life. ‘At GROWN we are not asking you to change your daily rituals, but simply add to the ones you already have,’ states the brand website. 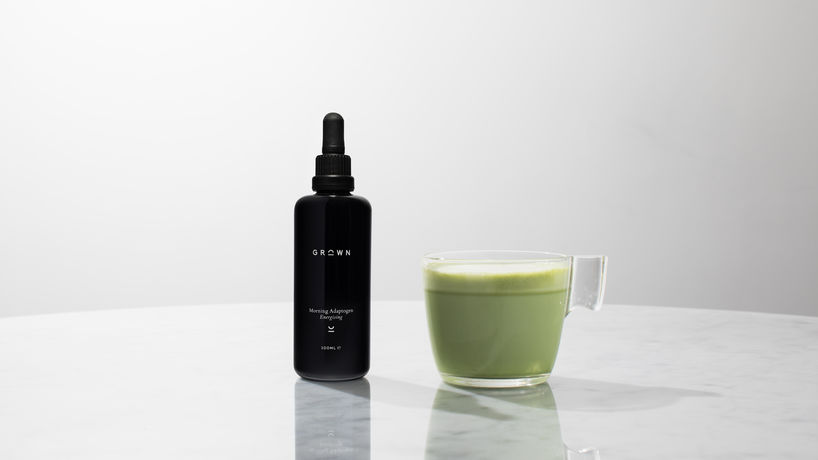 Interesting format – Boost your health with a drop! Yours, Fran

In a secret room hidden in the ever-sophisticated Berkeley hotel in London, there exists an immersive cocktailing experience like no other on the planet…

It’s called “Out of the Blue”, and it’s something like a cross between a very fancy cocktail bar and a very advanced virtual reality project. Rest assured, it’s the first of its kind—and a substantial amount of booze is involved.

To participate, you’ll you’ll visit the website and make a reservation. The room only accommodates four people per hour, so you can imagine it’s a pretty hot ticket…

The room is a 360-degree projection environment, meaning you’ll be surrounded on all sides by screens capable of transporting you to some very nice places. Thankfully, they’ve specifically designed film, combined with molecular scents, to match a totally bespoke set of four taster-sized cocktails.

Enjoy your sunday! Yours, Fran

Symrise, a German fragrance & flavor manufacturer, invited for an aromatic dinner in Dubai to enjoy food, perfume accords and music. 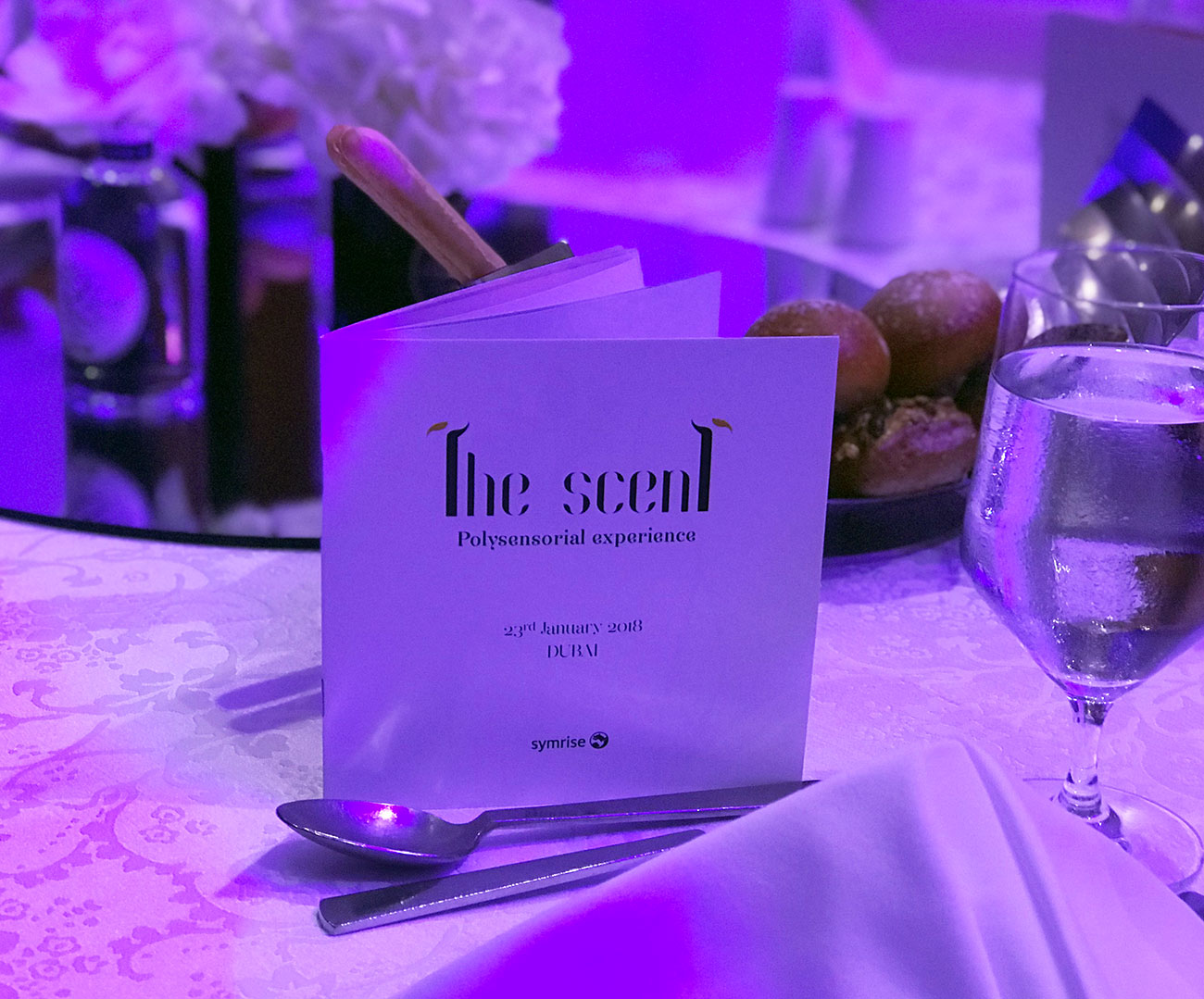 The three courses of the dinner menu included three accords: “Contrast” for the starter, “Metissage” for the main course and “Overdose” for the desert. At the end of the dinner, there was a final scent presented, especially developed for this occasion by perfumer Philippe Paparella (senior perfumer at Symrise). 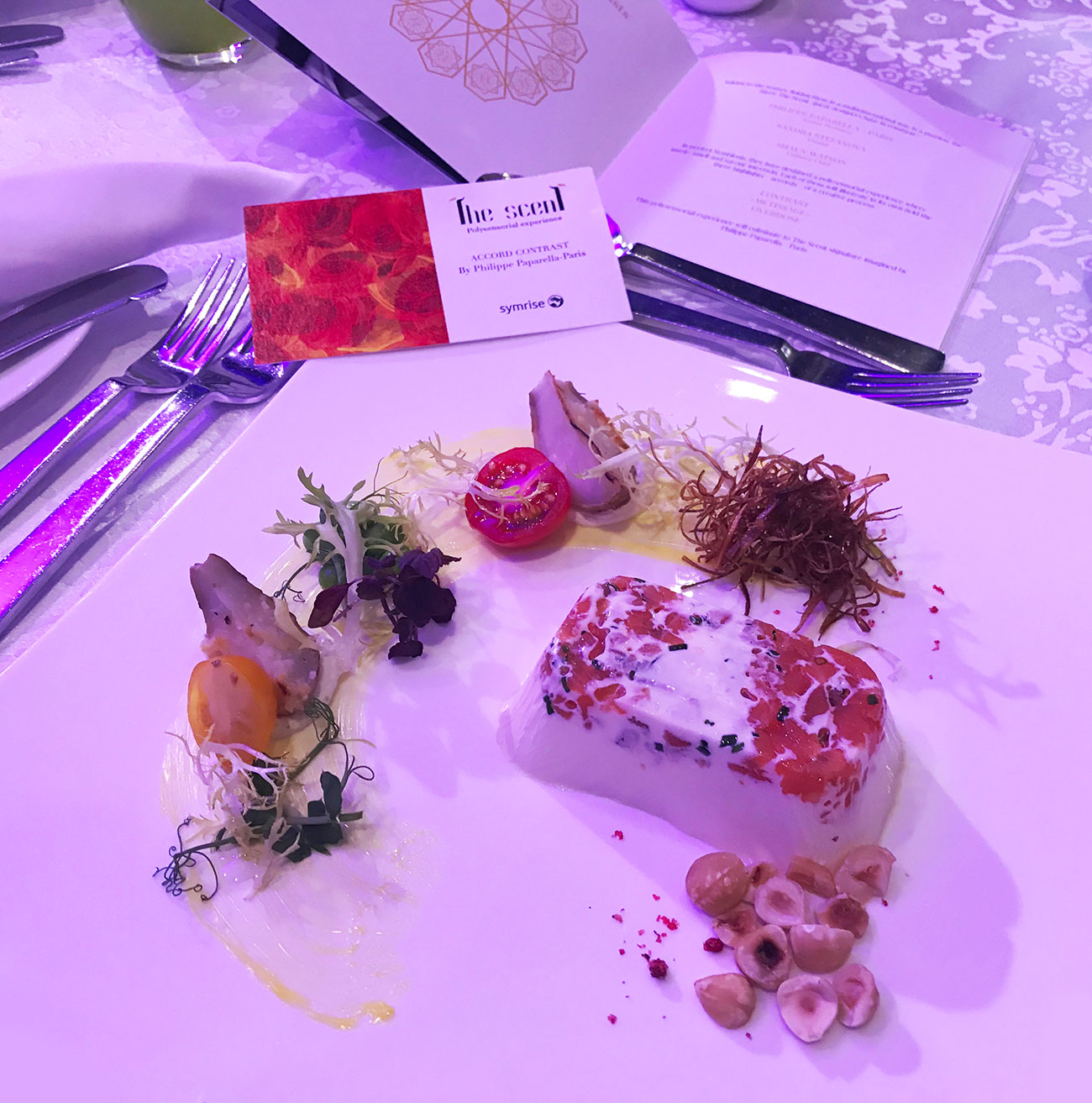 For the contrast accord for instance, people were given a gourmand accord built on a contract of sweet and salty elements: cereals, roasted hazelnut, sea salt whilst eating smoked salmon panna cotta with baked artichokes, caramelized leeks and hazelnut oil.

Curious about the rest of the menu? Check it out on Fragrantica.

Ohhh how much I was looking forward to have a little sunny vacation in these dark winterdays!

Good food, tasty wines and the best company… What else do you need?!?

We discover Lisbon for the next days with all its beauty.

I wish you already a great new years celebration!!! Let’s go for a fantastic 2018 😉